Stocking up on tea or looking for gifts for the holiday season?
Shopping online might be a good option this year!
Contact us at smallteacoop@yahoo.ca or call 250 337 8348. 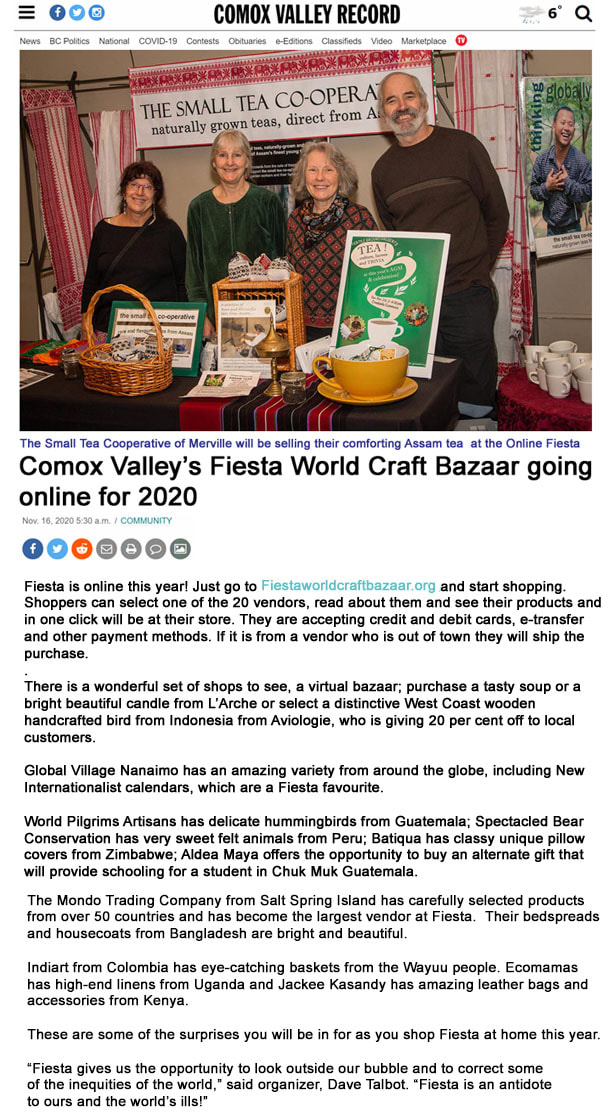 Some of the wonderful events The Small Tea Cooperative has taken part in over the years!

Tales of Tea - stories, music, images and teas from the heart of Assam

Change is brewing in the tea industry in Assam, and the small tea co-operative will be taking the story on the road again in the coming year

If you'd like to arrange for a tea tasting or presentation in your community, let us know.   We'd love to share our stories and introduce you to some great teas!

Control over the production and sale of tea has been in the hands of powerful business interests since it first became a commodity in the mid 1800’s.   Established by the British East India Company after they lost their tea trade monopoly with China, Assam’s tea plantations have had a large influence over the culture and economy of the region.  Aggressive land-use policies stripped the indigenous people of their land rights and encouraged European and non-Assamese entrepreneurs to develop an industry that has been an important foreign exchange earner for the country for the past century.

In 1998, when long-time social activists Kel Kelly and Peggy Carswell were asked by local fair-traders working with the World Community Development Education Society to track down a few small-scale growers who could provide a supply of organic tea, they jumped at the chance to return to Assam.  They spent several months traveling throughout the state, riding on buses, in rickshaws and even on the backs of elephants to small villages where tea was, for the first time, being grown as a cash crop by local people.  Early on, they discovered that most of the tea being grown at these family-owned gardens was destined for factories owned by some of the big players in tea who were happy to find a local source of green leaves.

Unfortunately, most of the new tea entrepreneurs had little or no training in cultivation of tea.  The information they had picked up was strongly influenced by practices used in large-scale commercial tea plantations which relied on monoculture, heavy use of chemical inputs and a large under-paid and overworked work force.  Without training and access to appropriately-sized processing equipment, it would be a challenge to locate independent growers who could supply the Canadian market with organic tea.
Times have changed in Assam and other north east states in the past few years, and the number of small tea growers has increased significantly.   Awareness of the high cost - both environmental and fiscally - of reying on chemical inputs is growing, as is the availability of fresh, locally-grown teas.   For most small-scale producers, fnding markets - locally, domestically and internationally - is challenging, but the number of growers growing and making naturally-grown teas is increasing on an annual basis.


One of the significant changes we've seen take place in the past 20 years has been the creation of an informal network of men and women from many different cultural and socio-economic backgrounds who are sharing their knowledge, their experience and their time with growers from Assam, Tripura (see below), Nagaland, Arunachal Pradesh and  Bhutan!

The small tea cooperative has worked closely with Level Ground Trading, a direct trade company based in Victoria, BC, Canada.  Level Ground is now marketing teas made by independent growers and producers in north east India in stores across Canada and the United States.

While we are still the small tea cooperative - in name and in size - we are continuing our efforts to support the development and awareness of the small tea growers in Assam and the north east.